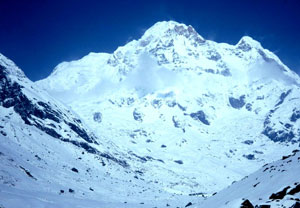 Annapurna lies to the north of Pokhara,this region is Nepal's spectacular diversity appears at its finest. The deep valleys and high mountains encircling the giant Annapurna Himal (mountain) embrace a wide range of peoples and terrain, from subtropical jungle to a high, dry landscape resembling the Tibetan plateau. This is the most popular trekking region.


The Annapurna trekking region consists of peaks; Annapurna I, II, III, IV, and Annapurna South.The major highlights of this trekking are the ancient mid-western salt route settlement of Manang, Thorong-La pass between Nepal and Tibet, Muktinath Temple and the deepest gorge of world Kali Gandaki. Mustang, or Lo Manthang, the desert plateau located in the upper valley of the River Kali Gandaki, and to the north of the main Himalayan range also falls in this region. The highlight of the trek includes the visit to the Mustang Palace, the visit to Lo Manthang and pony rides to the Nepal-Tibet border. Annapurna region is reached via Pokhara, which is 200 kilometers from Kathmandu. It takes five or six hours a day by road and 30 minutes by air from kathmandu.From Pokhara one can take bus ride or hire a taxi. Food and accommodation is easily available Pokhara.